Just days after what would have been Bankroll Fresh’s 29th birthday, we are now hearing from his uncle Marvin Shadi Powers, VP of Digital Marketing for Street Money Worldwide.

In his open letter to blogger DJ Vlad, Marvin Shadi Powers lists his concerns with the interview Vlad conducted with rapper No Plug titled “No Plug Details Killing Bankroll Fresh in Self Defense.” He discusses his grievances with the lack of journalistic integrity concerning the death of his nephew and how he feels about the blogger’s contributions to the black community. 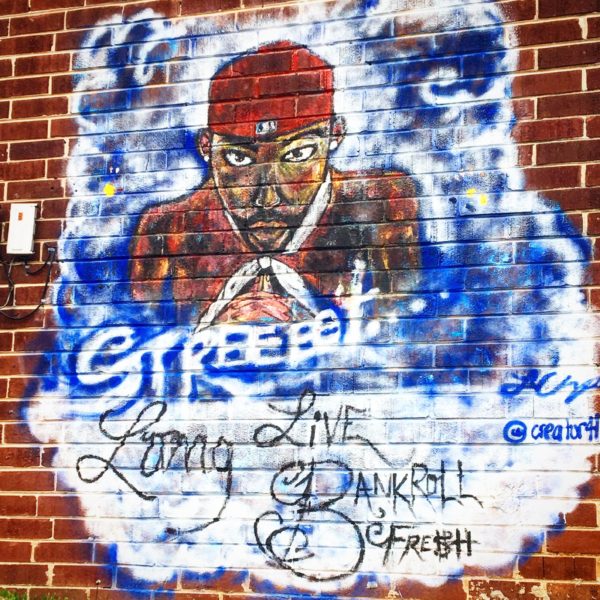 Dear Vlad, (VladTV)
You disrespectful culture vulture. I offered you to talk to my family, (Bankroll Fresh’s family) when my nephew was first killed. Did you call us or reached out to the Street Money Worldwide family or his father and mother to get a rebuttal to No Plug’s story? None of that!

When I asked you to interview Bankroll PJ and how he was continuing the legacy, you had a subordinate call me to tell me, you’re passing on PJ. He had just released a new single out plus he’s starring in a new FX TV show (Atlanta) this fall with Childish Gambino but no that was too positive, huh? Not enough black on black crime?

But you gave this coward a forum and put this hating coon on your platform like it was some light humored story. Sitting there smiling and talking about how he love my family. Where was the remorse with all that chuckling? And then the story he was telling you were straight bullshit with more holes in it than the police’s reasons for killing Alton Sterling. You’re an poor excuse for an journalist, if we can even call you one. And while the whole black community were coming together to protest “cops killing black men”, you drop this one sided interview of an open investigation for an unsolved murder of Bankroll Fresh. Was that strategic Vlad? You wanted to show more black on black violence on the same day? All you do is take from our community!

My nephew is dead and you’re having a light humored conversation with an alleged killer like it’s just another interview with Taxstone or Charlamagne. What’s funny? This shit ain’t funny!!! Even as a responsible journalist or the leader of urban news as you claim, you should have had the rebuttal interview with our family and/or other people who was there. Then you let him talked without confirming anything beforehand? Did you talk to the D.A.’s office or the APD Homicide? Even if no charges was brought, it doesn’t explained the real truth on why he was at the studio in the first place! It’s only his side of the story! Where’s the other sides??? Where’s the TRUTH???

No other man of another color or race should have that much power over the narrative of what happens in black communities. Our stories, our lives and even our music and don’t even give back at all. And then you get slick every now and then and subliminally try to drop other vultures like Slim Jesus in our psyche to see if you can get away with it. You’re really a pornographer that found a better hustle: “pimping black culture”. I know you. I worked for you. You don’t give back to our community! How much of that 50K a month, do you donate to the black community. Ad agencies use your site to pimp everything from fried chicken to Coca Cola and pay you well. Words from your own mouth! Cavario from Don Diva warned me about you back then. Eben Gregory from Ebengregory.com warned me about you.

You’re worst than Harvey Levin over at TMZ but most of you cats who make money from black people stick together. Y’all always trying to get money out the hood, one way or another. Corner store or a rap label, covering urban culture or making black movies for black people. But you don’t give a damn about us, you’re worst than the police because you’re killing us slowly with the crap you feed our youth everyday. Just so you can get traffic and views because that’s the new “guns & butter”, advertising dollars for unique visitors. You think we’re stupid.

Since the Hip Hop Nation co signed you and every other idiot who want to be seen or want to remain relevant jumps in front of your camera on some “Steppin Fetchin” shit and take us back 50 years in morals and principle. The internet ain’t killing my people, you are with your VladTV. You’re irresponsible and you will be checked for it when the opportunity presents itself. Your end is near.

So are y’all finished or are y’all done??? You trying to destroy my nephew’s legacy after someone took his life? I’ll see you when I see you, clown. Let’s have some tea or break bread or something? But you will put some respect on Bankroll Fresh’s name. That’s a promise. Stay tuned for the real exclusive Bankroll Fresh news on Revolt, AllHipHop and WSHH among others, from my brother and Bankroll’s father, and COO, K­Rich, Street Money Boochie and Quick Trip from Street Money Worldwide. Shame on you, thief! There’s 3 sides to a story, there’s, our’s and the TRUTH!!! You should have done your job, crook! I’m still Nat Turner to you!!!!